Documentary reports provide a site narrative that can detail previous land use and the status of a site during the historic period. In terms of the archaeology, it also can offer an account of intrusions into the underlying archaeological layers that determine the preservation or destruction of the remains. If done in a consistent and comprehensive manner it has the potential to recreate the historic townscape of earlier periods.

A number of documentary studies have been included in various archaeological reports relating to sites in Ipswich and elsewhere in Suffolk. Often these have been prepared at the assessment stage and the subsequent excavation of a site or examination of an adjoining area has provided an opportunity to revise and expand on the original documentary study through researching additional sources.

Since the publication of David Allen’s ‘Ipswich Borough Archives 1255 – 1835 A Catalogue’ (2000), it has been easier to identify relevant sources in that collection, but the borough archives represent only part of the rich archive of material that is available. In the main, site histories have been traced through combining cartographic sources with earlier property records relating to the same site or immediate area and in some instances lists of rents, local and national taxes raised on the properties. The method is not new, in 1899 the Ipswich historian and part-time borough archivist Vincent Redstone examined documentary sources relating to the site of the former Carmelite Priory in Ipswich following Nina Layard’s excavation of part of the site. Their articles published in the Proceedings of the Suffolk Institute omit plans of the site. Redstone revisited this research in 1928-1930 at the behest of the printers W.S. Cowell Ltd whose premises occupied the site. His research notes are held at the Suffolk Record Office in Ipswich (ref. HD11/1:4291/6.35). Also a sketched plan showing his plotting to the property boundaries together with two other plans showing the location of Nina Layard’s excavation and the positions of the priory walls discovered in 1899 and 1939 are in the W.S. Cowell Ltd collection (ref. HC439/A/C2/6-8). The plans suggest that Nina Layard’s work was something more than a ‘watching brief’ suggested by some commentators. Though from as early as the beginning of the 14th century a number of documentary sources contain measurements of properties and extensions to properties - there has been no systematic attempt to plot the property boundaries on later maps.

There are no historical references to Ipswich before the late 10th century when the 970 AD charter of the bounds of Stoke by Ipswich provides the first site-specific reference to a location in Ipswich: Hagenefordabrycge, the present Handford Road Bridge. Despite the importance of the Domesday survey c. 1086, documentary sources remain sparse until the mid-thirteenth century. From that point onwards, the range of documentary sources that can be used for the historic geography of Ipswich greatly increases.

A considerable amount of the early material relating to the history of Ipswich has been published or studied by earlier historians and though a knowledge of Latin is a distinct advantage when it comes to considering the medieval material, a range of these documents are accessible through transcripts and translations.

Most manuscript sources relating to the history of Ipswich can be found at the Suffolk Record Office in Ipswich. The record office also has microfilm copies of various manuscripts that are now held at other repositories, such as the British Library and Cambridge University Library - in addition to their extensive local history library and studies collections is a comprehensive archive of published material. It is possible to search some of the record office’s catalogues online using the National Archives’ Discovery, which can be used to identify further sources held at the National Archives and elsewhere. The National Archives website also hosts the Manorial Documents Register. Some of the more important catalogues, such as those for the Ipswich Borough Collection, the Ipswich Port Authority Collection and parish collections of all of Ipswich’s parishes are available through the Suffolk Archives. 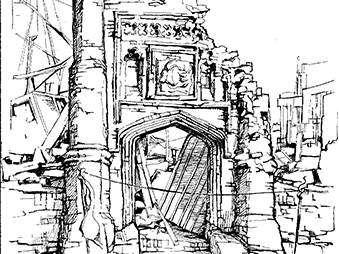