Happy New Year from the Archaeological Service. Welcome to our e-newsletter for February 2021

This issue will give you a taste of the type of activities and projects we do to promote, protect and conserve the archaeology of Suffolk.

We look forward to this new year which will bring some exciting new projects. 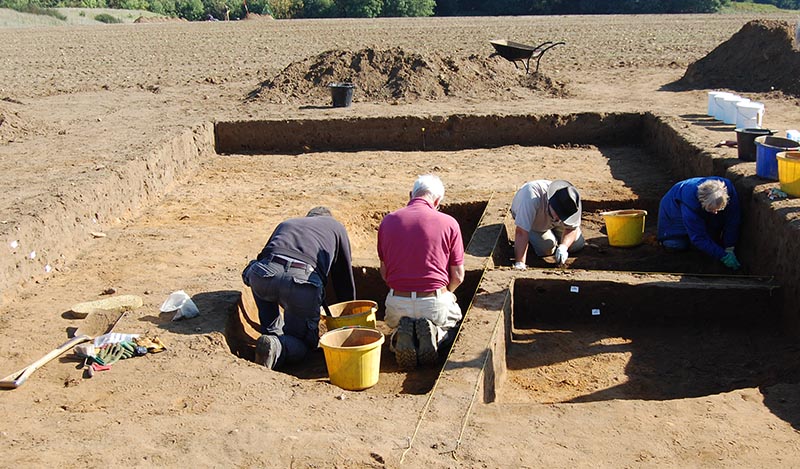 Image: excavating a sunken-featured building at Rendlesham in 2014

Over the past year, the Archaeological Service at Suffolk County Council have been developing a community archaeology project to uncover the hidden archaeology in the Deben valley in south-east Suffolk. We are delight that the National Lottery Heritage Fund have just announced that they will award a major grant of £517,300 to enable this project to go ahead.

The project, Rendlesham Revealed: Anglo-Saxon Life in South-East Suffolk, will follow on from a pilot project undertaken 2008-2017, which uncovered evidence of the Anglo-Saxon royal settlement, first recorded by Bede in the 8th Century, where the East Anglian kings would have stayed, feasted their followers, administered justice, and collected dues and tribute.

This project will connect the unique stories of the princely burials of Sutton Hoo and the site of the royal palace at Rendlesham to put them into the context of the wider Anglo-Saxon communities and landscapes of which they were part.

Made possible by money raised by National Lottery players, the grant will unlock at least a further £200,000 in match funding from local and national partners, universities and volunteers. This match funding includes smaller cash grants generously given by Institute of Archaeology at University College London, the Suffolk Institute of Archaeology and History, The Sutton Hoo Society and Council of British Archaeology East. This project has also been made possible by the kind support of local landowners.

The involvement of local people will be essential to the project. There will be a range of opportunities for local people to volunteer and be trained in on-site archaeological survey and excavation, as well as taking part in hands-on experimental archaeology events, specialist and family workshops, guided walks and exhibitions.

All events, workshops and volunteer opportunities will start in Summer 2020 until 2023 and will be widely advertised, so stay subscribed to the e-newsletter for updates, and follow @SCCArchaeology on Twitter, Instagram and @SCCArchaeologicalService on Facebook to keep up-to-date. 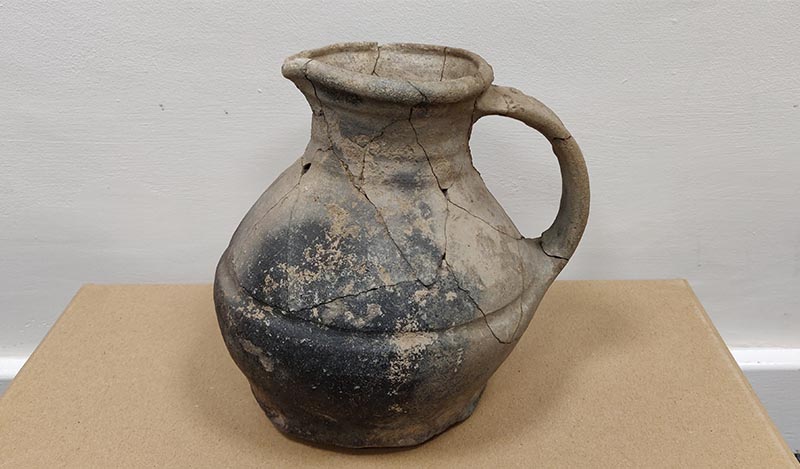 Anglo-Saxon, Medieval and Later Pottery of Norfolk and Suffolk

We have been undertaking a Historic England externally-funded project to create a type-series for the Anglo-Saxon, Medieval and Later pottery of Suffolk and Norfolk.

A fabric and form type-series was created by local pottery specialist Sue Anderson. Analysis of existing data has allowed for fabric groups to be identified and samples to be collected from archive assemblages. These have been used for the population of a physical type-series and for the scientific analysis of fabrics.

This will provide a standardised way of recording pottery in Norfolk and Suffolk, and will be an invaluable archaeological resource for dating archaeological sites and contexts in a locality, so collections can be studied and interpreted effectively. Researchers, commercial archaeology units and amateur archaeology groups will all be able to benefit from this.

The physical type-series for Suffolk is now complete and is available to use by request. The next stage of this project will focus on the Norfolk type-series. All the information will be available in the near future on an online database which is now in development. 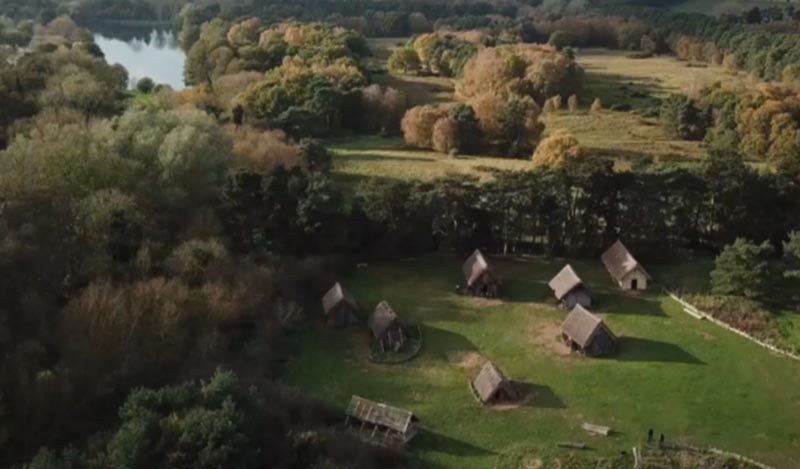 Communities, schools and the landscape of the Brecks will benefit from another series of exciting landscape and heritage conservation projects thanks to a £2m grant from The National Lottery Heritage Fund. The project aims to understand, reveal, celebrate and protect the lost natural and historic heritage of the Brecks’ Fen Edge & Rivers over the next 5 years.

Rated as one of Britain’s top three landscapes for freshwater wildlife, the Brecks are home to nature as significant as that in the New Forest and the Broads. Across the scheme area lie biodiverse chalk streams and networks of ancient Pingo ponds. This project will bring to the fore how the Brecks' fenland fringe, freshwater habitats and river corridors provided the conduit for biodiversity and early settlement of a hostile landscape. Although the area is famed for being sandy and dry, it is the watery landscapes that are the driving force behind the area’s unique biodiversity, and its history of human settlement.

Archaeological activities as part of this project will involve volunteering and training opportunities for local people in fieldwalking and geophysical survey in the Lark valley. These will be advertised later in the year via this e-newsletter and our social media channels.

For more information about the project and other events and activities visit: www.brecks.org 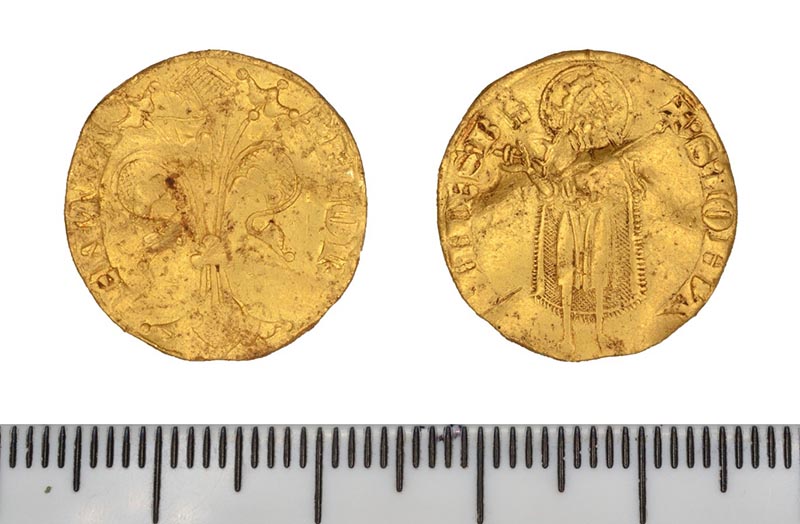 This Medieval gold Florin, struck by the Republic of Florence between AD 1285 and 1290, was recently found in Suffolk. Many thanks are given to the finder of this object for allowing it to be featured.

The coin depicts on the obverse a fleur-de-lis, which is the symbol of Florence, surrounded by the legend +FLOR-ENTIA. The reverse bears the standing figure of the city’s patron, St John the Baptiste, bearded and nimbate, wearing a hair shirt and holding a ferula; the legend reads S IOHA-NNES B.

The first coin of this type was introduced in Florence in 1252 during the turbulent period of clashes between Guelphs and Ghibellines in the Italian city-states of central and northern Italy. These two factions were opposing each other, one supporting the Pope and the other supporting the Holy Roman Emperor after the Investiture Controversy, which began in AD 1075. 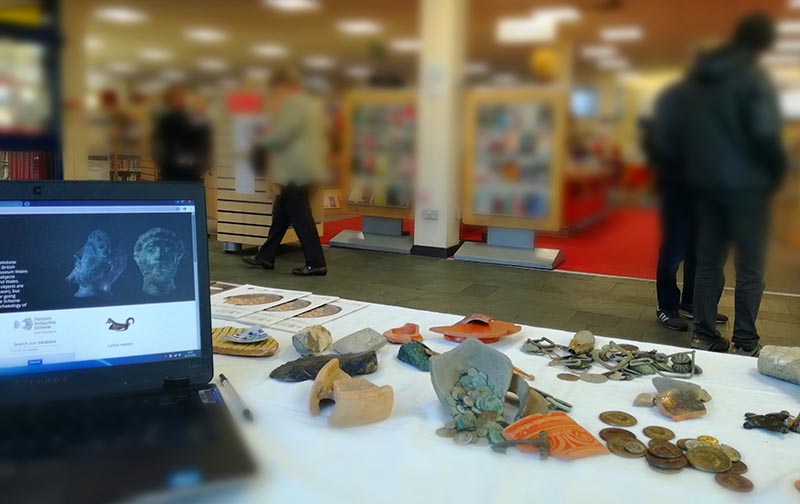 Have you recently discovered an archaeological object?

Curious to have a find identified? New or seasoned metal detectorist wanting to record your artefacts?

Drop in any time between 10am-3pm

For enquiries, please contact the Suffolk Finds Liaison Officers on 01284 741241 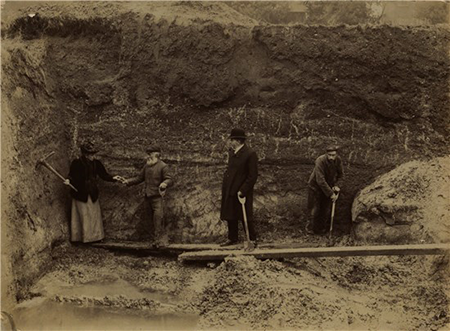 Suffolk is one of the most important counties in England for Early Prehistoric (Palaeolithic and Mesolithic) archaeological remains. This is not just in terms of numbers of finds/sites (c. 1660 known) but also because it is home to some of the most important sites in Europe, such as Pakefield and Beeches Pit. Suffolk also has significant post-glacial Long Blade Sites, such as Devils Wood Pit, and has a wealth of Mesolithic material. The information on this period of archaeology across Suffolk is incomplete and therefore difficult to characterise.

The Archaeological Service are undertaking a systematic enhancement exercise to enhance the Suffolk Historic Environment Record which aims to improve the understanding and management of Palaeolithic and Mesolithic archaeology in Suffolk in the planning process. The project is funded by Historic England and will run to October 2020. 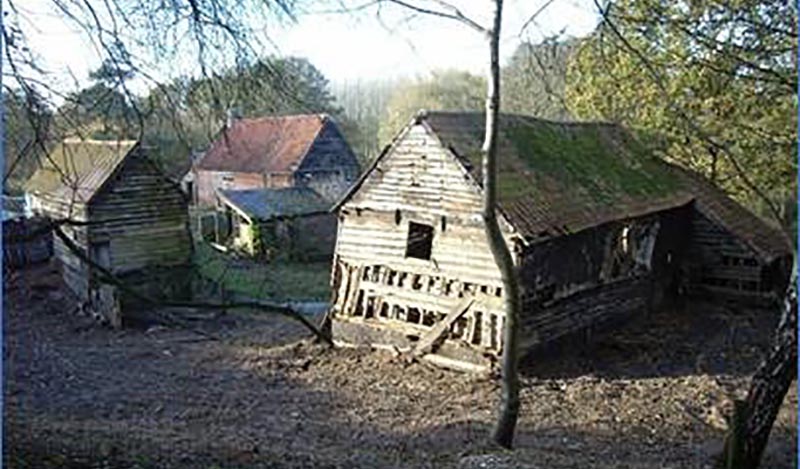 Farmsteads in the Suffolk Countryside

Farmsteads form a high proportion of the undesignated buildings in Suffolk's countryside and, for the most part, they are not protected by national listing or designated conservation areas. There is a need to ensure that these historic buildings are consistently and appropriately understood and managed in the planning process to ensure sustainable development of such a valuable element of the county’s built heritage.

The Archaeological Service are undertaking a project which will enhance the Suffolk Historic Environment Record with records of every farmstead in Suffolk using nationally-recognised methodologies. This will serve as a basis for early engagement in the planning process and will facilitate informed management decisions. The aim of this project is to establish a platform for stakeholders who own, look after, research, develop and plan for farmsteads. This work will provide a basis for future work on the character of historic farmsteads and guidance on their management. This project is funded by Historic England and will run until March 2021. 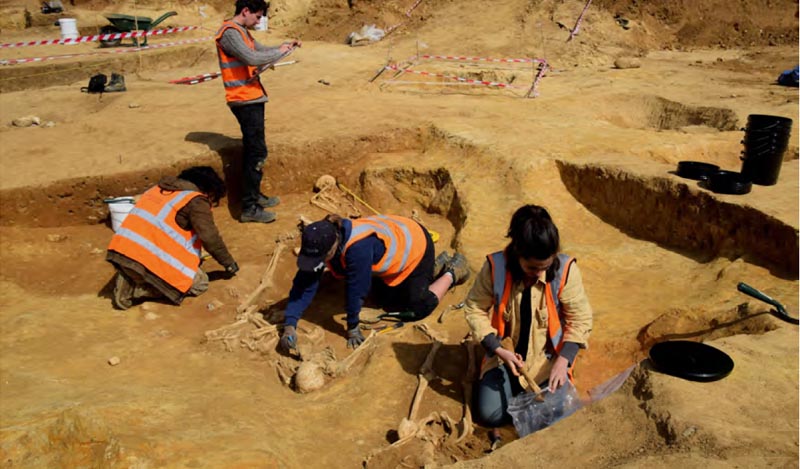 The village of Great Whelnetham, near Bury St Edmunds, has evidence of past settlement on the eastern bank of the River Lark since the Roman period. Evidence for Roman settlement, including a pottery kiln, vessels, coins, cremations and burials were first recorded in 1964 and subsequent archaeological investigation have continued to revealed more of this extensive settlement. The village potentially lies on the projected route of the Roman road between the towns of Pakenham and Long Melford.

In 2018-2019, we monitored the excavations of a site here in advance of residential development. Archaeological Solutions conducted the excavations which identified further evidence of Roman settlement and burials.

What makes this site so interesting, was the discovery of an inhumation burial cemetery, which dated to the 4th century AD. The cemetery was located outside the known Roman settlement, as typically domestic and funerary activities were kept separate. Evidence of 52 burials of men, women and children were uncovered. Two thirds of these graves were classified as 'deviant' burials, meaning that they were placed or treated in a manner that did not conform to the most common Roman burial rite. This cemetery is unusual, as although Roman cemeteries tend to have a limited number of deviant burials, in this case there was a very high percentage.

As this was such an unusual and interesting site for Suffolk, it caught the attention of the national media and was featured on BBC's Digging for Britain, watch a short clip here.